Another old post from the SewSheSho blog! This is a review of the Cashmerette Appleton dress, this is the first one I made and I’ve worn it on numerous nights out! Over to past me to tell you more….!

Bonjour mes amis…We’ve been back from our new year trip to France for two weeks now and it already feels like a distant memory! It was a lovely break, and I was lucky enough to have some time to sew out there. I carted my sewing machine, overlocker, sewing box, 3 bags of fabric and an array of patterns on a ferry sailing and a 4.5 hour drive across rural France because I wasn’t sure exactly what I wanted to make, and I didn’t want to be limited on choice….I actually only made one dress and a top! Still, it was worth it and I did cut out another five garments which has saved me a lot of time this end! Now onto the dress I made on New Years Eve… 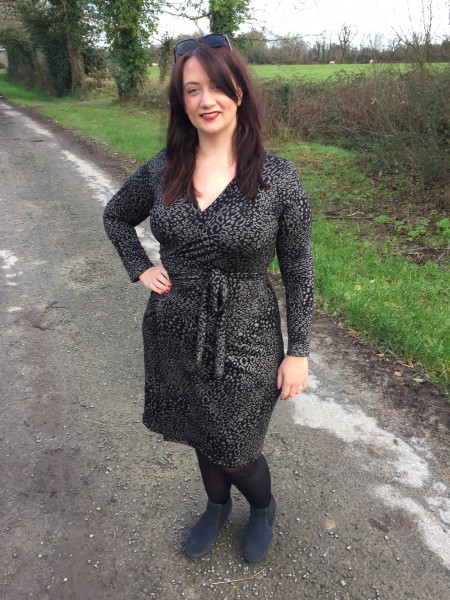 I’ve always been a fan of the classic wrap dress. Worn with a camisole for work or a shorter version sans cami is great for going out, and I’ve found the nipped in waist and low neckline flattering for my figure.

The tricky thing is, the right fit is often so hard to find. I’ve had the Sew Over It wrap dress pattern for ages and had even traced it out but knew from the pattern pieces I would need to do an FBA to cover my DD chest. The motivation needed to do an FBA on a one-piece dress pattern has never been high enough, so it’s languished in my pattern stash for ages, even though I’ve seen some lovely versions on the blogosphere and Instagram.
When Jenny announced she was launching Cashmerette Patterns with the Appleton dress, I’ll admit whilst being really pleased there was a new curvy indie pattern company in the market, I didn’t actually rush out to buy it. At first I thought the neck band could look a teeny, little bit frumpy – I’m  really sorry, I’m just being honest! After a month or two seeing lots of versions popping up on all different shapes and sizes, I decided that actually pattern looked pretty damn good on everyone so bit the bullet and ordered a copy.

The pattern is printed on tissue paper (slightly thicker than the big 4) and each of the three cup size variations; C/D, E/F, G/H, have their own pattern piece, sized from 14 – 28. This is absolutely brilliant for those of us that don’t trace patterns, as you can cut the pattern directly and if the cup is too small, just cut the next cup size up (as long as you’re sure which dress size you’ll fall within)! I’m a DD and wasn’t sure whether to go with the C/D or E/F but Jenny advises if you fall between cup sizes to go with the one that fits with most of your measurements so I chose C/D. It’s probably best not to drink too much Cointreau Fizz when cutting out pattern pieces, as I didn’t initially notice it is the same front piece for both sides, which you flip over and cut slightly narrower for the side that wraps on top. I was merrily cutting away before realising that you need to leave the extra width for the underneath wrap piece. Luckily it was easily rescued with a bit of sellotape! 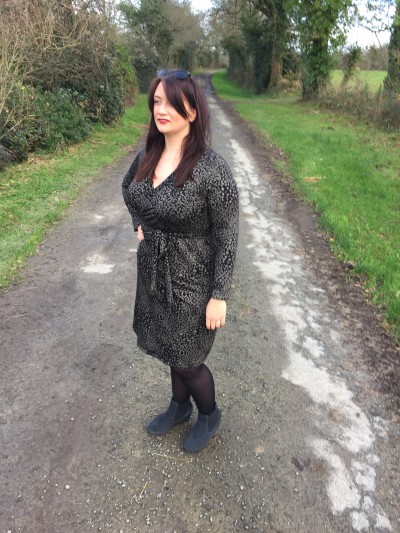 As there’s no FBA required, again another massive plus point, it didn’t take long at all to cut out all of my fabric.  I used this black and silver stretch jersey which is heavy enough to almost be a ponte. It was bought from Goldhawk Road last summer and I hadn’t been sure what to do with it. It cost £4 pm and I got the end of the roll so about 2m for £6! It has silver sparkly animal print on it and has a really good recovery. Thinking that this would be a wearable toile as the fabric was so cheap, I’m so pleased it turned out so well – don’t you love it when that happens?! 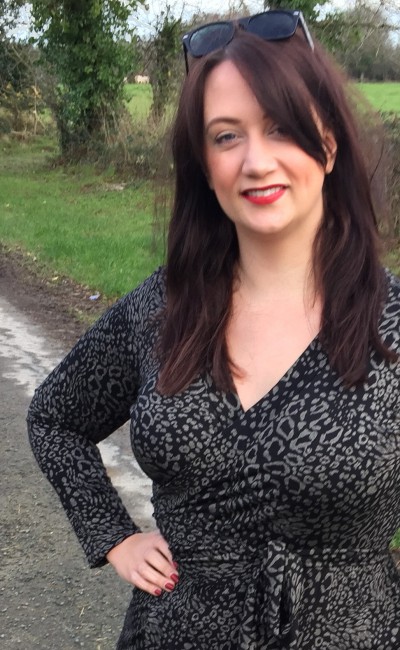 Jenny’s instructions are really clear, and the instruction booklet is laid out nicely, with useful pictures. Everything is very easy to follow and I found the dress came together very quickly. You sew the shoulder seams, then the neckband and ties, which attach to the front and back pieces. The neckband is drafted to be slightly smaller than the front pieces and you need to stretch it a little as you sew. This means the neckband is nice and tight to your chest and magically avoids gaping…Genius if you ask me, and yes I was definitely wrong about it being frumpy! I added clear elastic to the shoulder seams as Jenny suggests and shortened the hem slightly. The trickiest bit is when you join the neckband to the waist ties, but as soon as I’d done it the wrong way the mistake was obvious and it made complete sense on the second attempt. If you do struggle at this point, I’ve just checked and there is a very handy video as part of the sew-along here. 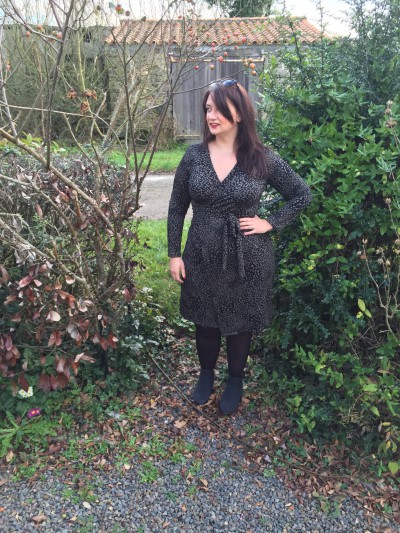 Some of the tester versions mentioned that the hip had a little too much curve and there were a few “saddlebag” issues. I can confirm this has definitely been resolved with the final version as the fit is great throughout. There is a bit of pulling on the front bust piece in this pictures, and at the bottom of the front wrap and it is there in real life although nowhere near as noticeable. I wondered if I should go up a cup size, but having made this dress again out of a fabric with less recovery, I’m pretty sure it’s because this one is too keen to return to its original shape – a little bit too much snap! 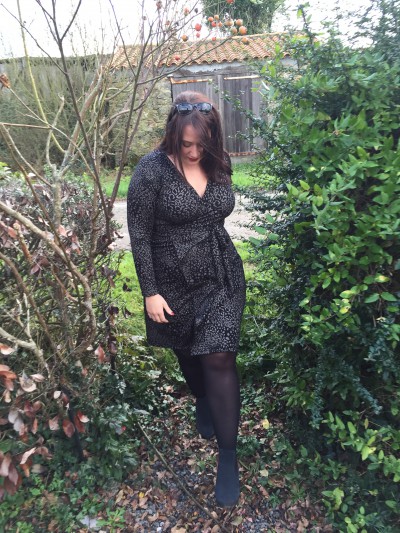 The dress holds up to walking around without any wardrobe malfunctions or knicker flashing, and I’ve tested that outside and walking round the office! I’m going to shorten it ever so slightly more as this fabric isn’t really work appropriate but it’s a little too long for me to feel comfortable wearing it on a night out.

This is the first dress pattern I’ve ever made that fits straight out of the envelope and it’s going to the top of my Much Loved list, in fact I’ve already made another version that I’ll share with you soon…