A beautiful guest make from Alice 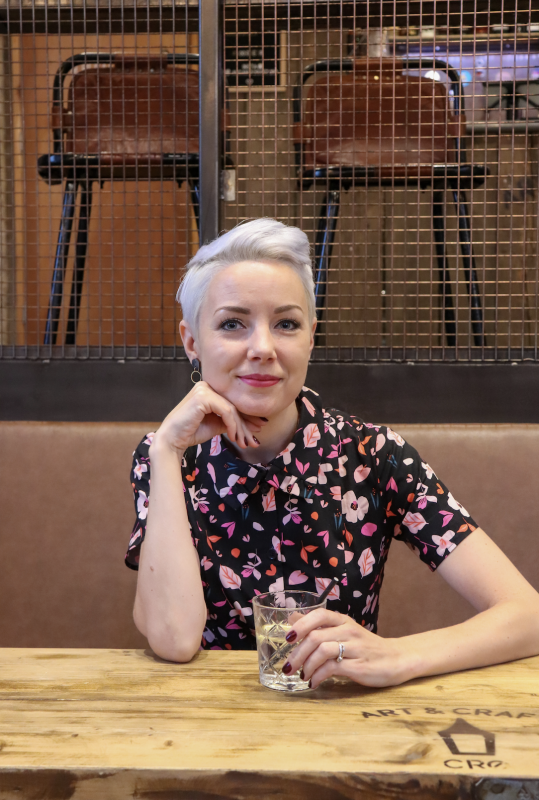 Hi, I’m Alice and you can find me on Instagram here, and a few weeks back, I was asked to write a guest post for Sewisfaction.

Always late to the party, this was my first make from the crazy-popular ‘Breaking the Pattern’ book from Named. I love their designs and have plans to make a few patterns from the book, but the shirt dress version of the Saraste jumped out at me and I had to make it straight away! It’s a very girly shirt dress with a gathered skirt (perfect for twirling) and a ruffle collar detail, but as with all Named designs, there’s something a bit quirky about it.

The fabric suggestions are crisp shirting for the shirt version, and you can go lighter weight for the dress. I chose to go bold with this beautiful ‘Botany Burst’ floral print Dashwood Studio cotton. 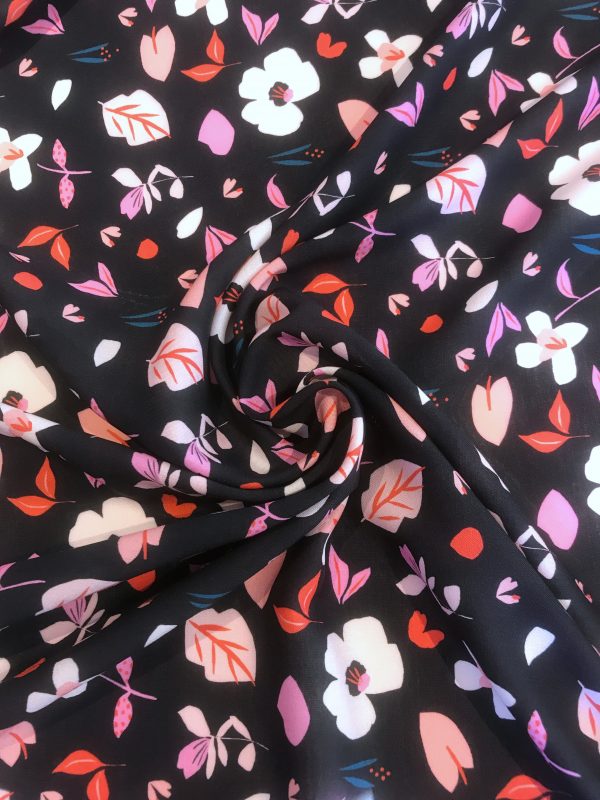 In terms of sizing I measured bang on a size 2. The finished garment measurements looked like they may be slightly large, but I thought best to err on the side of caution – it can always be taken in if it’s too big, but if I cut too small, I’m stuck (maybe literally!).

The book comes with all the patterns printed, but with multiple patterns on each sheet of paper you do have to trace – no shortcuts here! There are 10 pieces to trace for the dress, so rather than see it as a means to an end, I think tracing this is a task you need to take your time with and enjoy. As much as I love a bit of tracing, I ran in to a spot of trouble with some of the lines disappearing! Hopefully this is a misprint on my book and not on every copy, but I had to just guess where some of the lines were meant to go which was a bit unnerving but luckily it worked out ok!

The fabric was beautiful to cut, it just sits where it’s meant to without budging, so I could cut with the precision that a shirt dress needs. The instructions are less detailed than some indie pattern companies, but if you’re a semi-confident seamstress, the whole construction is really straightforward, especially for such a beautifully detailed dress. The skirt is gathered, and I’ve never gathered fabric so smoothly, this cotton did exactly what I told it to – the dream!! I fell a bit in love with the fabric, so I decided the dress needed to be finished as neatly as possible. I’m still not talking to my overlocker (we fell out a few months ago) so I did tiny zigzags and trimmed the seam allowances, but I bound the waistline which could have otherwise looked a bit messy inside: 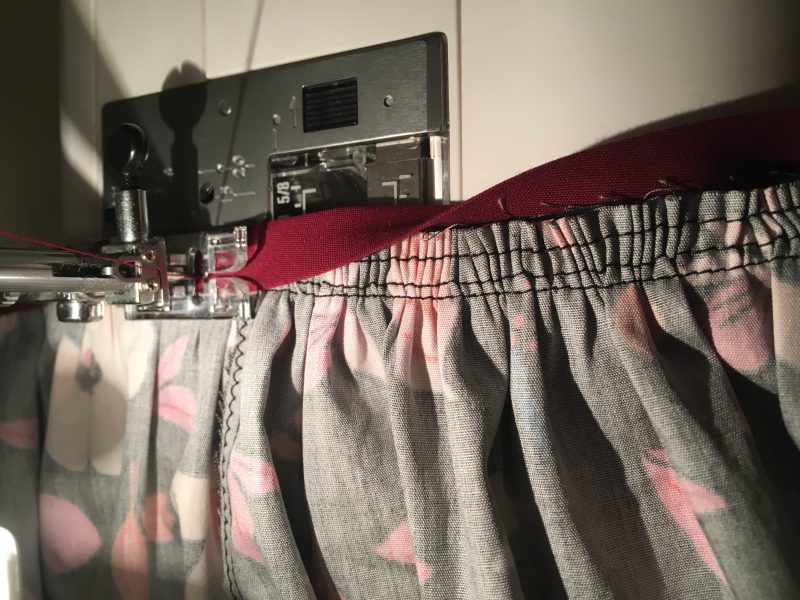 The dress has princess seams to give it shape on the bodice, which look so beautiful compared to darts. In the past I’ve made garments with princess seams and they need a lot of easing and manipulating, but these seams just glide together. There’s an option to add a little ruffle on to the collar which is such a gorgeous detail! It isn’t actually very gathered; when I was gathering it, I was convinced I’d cut it wrong, that maybe it was meant to be cut on the fold so mine was half the length it was meant to be, but it’s just a subtle gathering so it’s not overly bulky. As with the princess seams, the sleeves went in place so easily, so this was a really satisfying make; in depth but not too challenging. 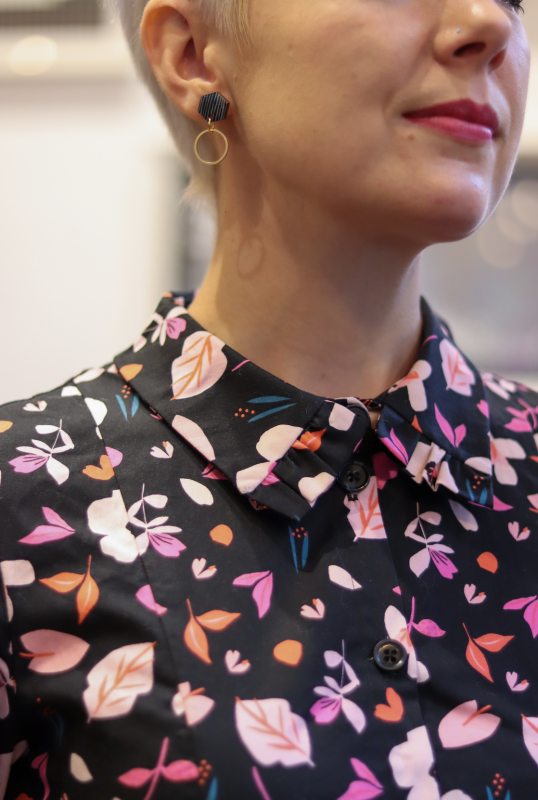 As I initially anticipated, the final dress has quite a lot of ease. When I first tried it on, I had the dreaded ‘nooo, it’s all wrong!’ feeling, but now I’ve worn the dress a few times I’m really glad to have the wiggle room. I have worn it with a belt to pull in the waist a bit, but other than that it’s really comfy having a bit of space on the bodice, while the sleeves sit in the right place on my shoulders, so it doesn’t risk looking like it’s just too big.

Although this is very much a statement dress (that print isn’t subtle, is it?), the style is so versatile, and the fabric is so comfortable to wear. I’ve worn it for a family outing, to work, and to a party, and it can be styled with layers, heels and flats, so you get a lot of variety from the one dress – perfection! 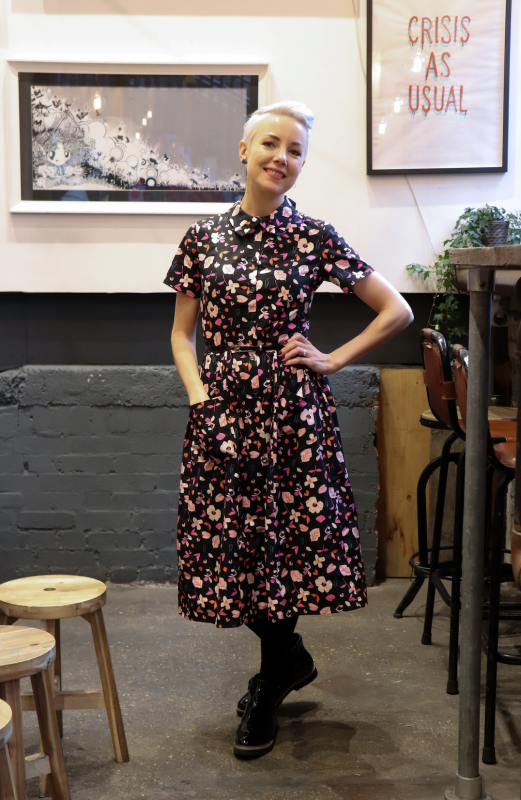